In a previous post I listed some options for audio data manipulation (conversion of format, sample rate, bitrate, trimming, etc), with SoX, MPlayer and FFmpeg. The obvious question is now: which one is best?

The obvious answer is: it depends. Several factors play a role in defining "the best": what audio formats do you want to convert from/to (e.g. FFmpeg and MPlayer support the typical patent/license encumbered audio and video formats like MP3 out of the box, while SoX is more conservative on this point), do you want more filtering options (SoX offers significantly more than the others), etc.

In this post we'll only look at the execution time as metric to determine "the best". Another metric could be "audio quality" but that was not important for my use case (I couldn't hear differences anyway).

The three commands I used were:

The result (lower is better) 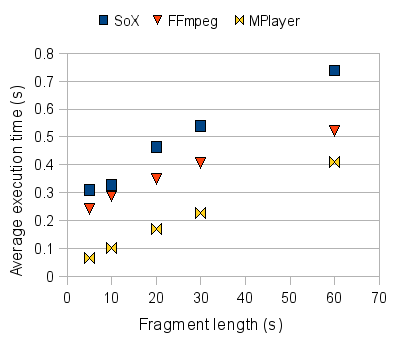 I also did the same experiment on other computers with different hardware and different software version, and the relative results were pretty much the same. However, one significant deviation happened on a setup with Ubuntu 8.04 (LTS, Hardy Heron): SoX v14.0.0 performed roughly 8 times slower than FFmpeg and even more than 25 slower than MPlayer for the short fragment lengths.