Since May 2009, I'm monitoring the Drupal 7 issue queue sizes. I use a cron job in Python that goes out four times a day to drupal.org to scrape the issue queue sizes mentioned in the "contributor links" block.

The idea is to see if the time series can be used to have some estimate when Drupal 7 will be ready. For a long time, the overall trend was a rising one and simple extrapolation would tell that Drupal 7 would never be ready :)

Since the beginning of December 2009, it seems that the "critical D7 issues" queue is finally in shrinking mode, so I thought the time was right for releasing an overview of my current data. Moreover, there is now a public Drupal 7 issue size tracker with more web-2.0-shininess by Damien Tournoud (with less history however), so I should contribute my data instead of keeping it for myself.

Here are is an overview of the more than 860 data points I collected so far: 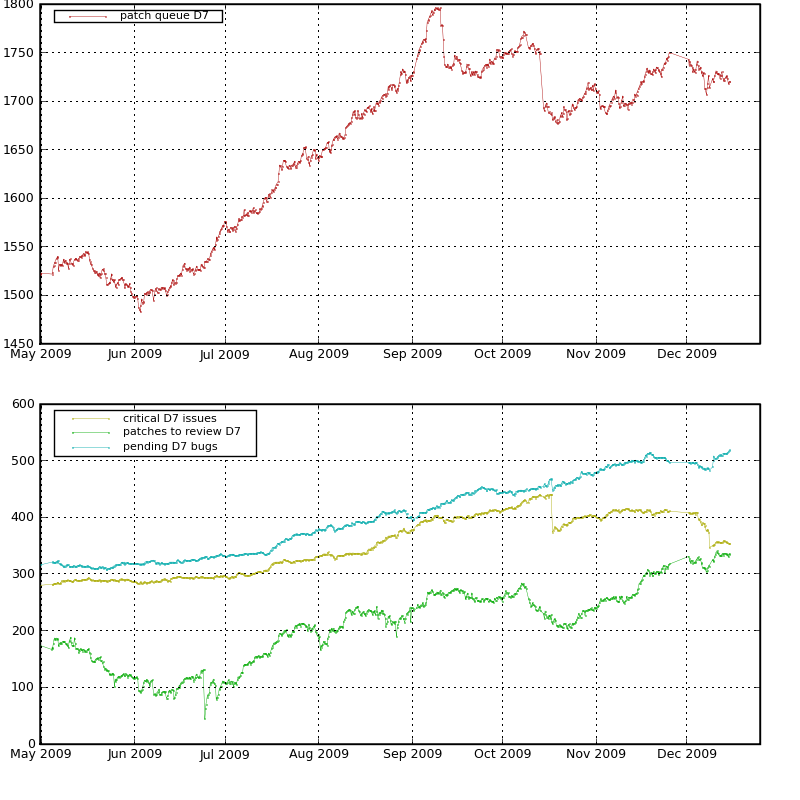 It's still a bit early to predict when the critical issue queue will hit zero. And who says that simple extrapolation will be a good indicator when Drupal 7 will be ready?

Note how you can clearly see the drop of critical issues and patches caused by the code freeze on 15 November 2009. Another abrupt change is the large drop in "patches to review" around the end of June 2009, but that was caused, if I remember correctly, by the testing infrastructure that went loose and wrongly labeled a lot of patches as "needs work". In case you wonder why there is a week of data missing at the end of November 2009, that's because I forgot to reinstall the cron job after a large system upgrade.